performed by the author, here are a few of the tracks featured in 'By George'

The musical opens in a Yorkshire street. The action switches between the chip shop and the pub - with diversions to the gym and a nightclub. Along the way, characters experience heartbreak, loss and exhileration.

But how will our hero make the ultimate - and most difficult - decision? 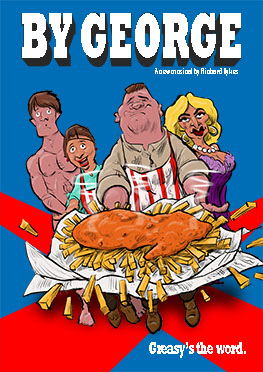 Princess (In a Tower)

My England and I

Richard Sykes's new musical 'By George', is an affectionate farce rooted in his past, but fixed firmly in the present. Here's a brief synopsis.

‘By George’s main characters are a mother, a father and a son; Pauline, George and Sam. They live in a house above their traditional chip shop and for years it’s pulled them in different directions. George has become cynically determined to maintain the status quo, Sam has grown up without anyone noticing and Pauline, whilst trying to please everyone, has failed to square life’s circle.

Marge has long been notorious in the neighbourhood; searching for husband number six, she sees George as a solid prospect, and his wife as a minor inconvenience. Ever-mischievous, she arranges for a special appearance at a hen party to stir up more than just the interest of the bride-to-be.

Fortunately, George and Pauline have close friends Harry and Lil to guide them and a community of customers willing to accept the eccentricities of a traditional chippy for the sake of a decent fish supper.

‘By George’ follows Pauline’s struggle to keep her family together, reconnect with her son, contemplate the advances of an admirer and keep Marge’s destructive attention in check. It’s harder to juggle than cod and chips twice when the fat leaks through the paper.

Get the script preview

‘Click on the button to open the script preview, you can also download it on a Mac by two-finger clicking (or ctrl+click) or on a PC by left-clicking the button.

The character definitions and possible cast size notes, followed by staging suggestions are the first pages of the script and may help in choosing to stage 'By George' for yourself.

Download the a sample page from 'My England and I'.

Get the score preview

‘Click on the button to open the score sample, you can also download it on a Mac by two-finger clicking (or ctrl+click) or on a PC by left-clicking the button.

Can Guy Travis, stage star, finance his latest show against all the odds. Two scheming servants, a lost love and nobbled nobility are all part of the story.

performed by Woodhouse Operatic Society, here are a few of the tracks featured in 'Good Grief'

Whatever Turns You On

You Wanna Be Me

As Long As You Love

‘Good Grief' (originally ‘Curtains’), is packed with one-liners and toe-tapping tunes. It premiered in 2000 and features ‘As Long As You Live’, ‘The Music Never Dies’ and ‘Whatever Turns You On’.

Guy – a renowned American showman – and his long-suffering sister Vera arrive from America to meet with a wealthy aristocrat who is financing Guy’s new show. A chance encounter with the aristocrat’s daughter, Jane, scuppers the deal before it’s done. But Guy isn’t the only one eying up the family fortune. A scheming butler and maniacal housekeeper have hatched a plot to rob Jane of her inheritance.

Can Guy secure his new show, win the girl and defeat the help? Possibly… but only with the assistance of dead nobility. All is revealed in this rollicking, fast-paced musical comedy.

With comedy and drama in equal measure, Singular forms an impressively cohesive one-person show, and is a terrific album too

A sung-through musical linking some of Richard's finest songs. Samples will be added here soon.

The original compilation show bringing together, for the first time, familiar favourites and unheard material from Richard Sykes's catalogue of songs

Songs include: The Easy Way Out, What a Wonderful Year!, A Better Man, Moving On and many more.

In development throughout 2020, 'Escape' is a bizarrely prescient black comedy.

The play is nearing completion and features four couples revealing secrets and solving puzzles to, ultimately, get out. Oh... and it's set in an escape room.

Update Required To play the media you will need to either update your browser to a recent version or update your Flash plugin.